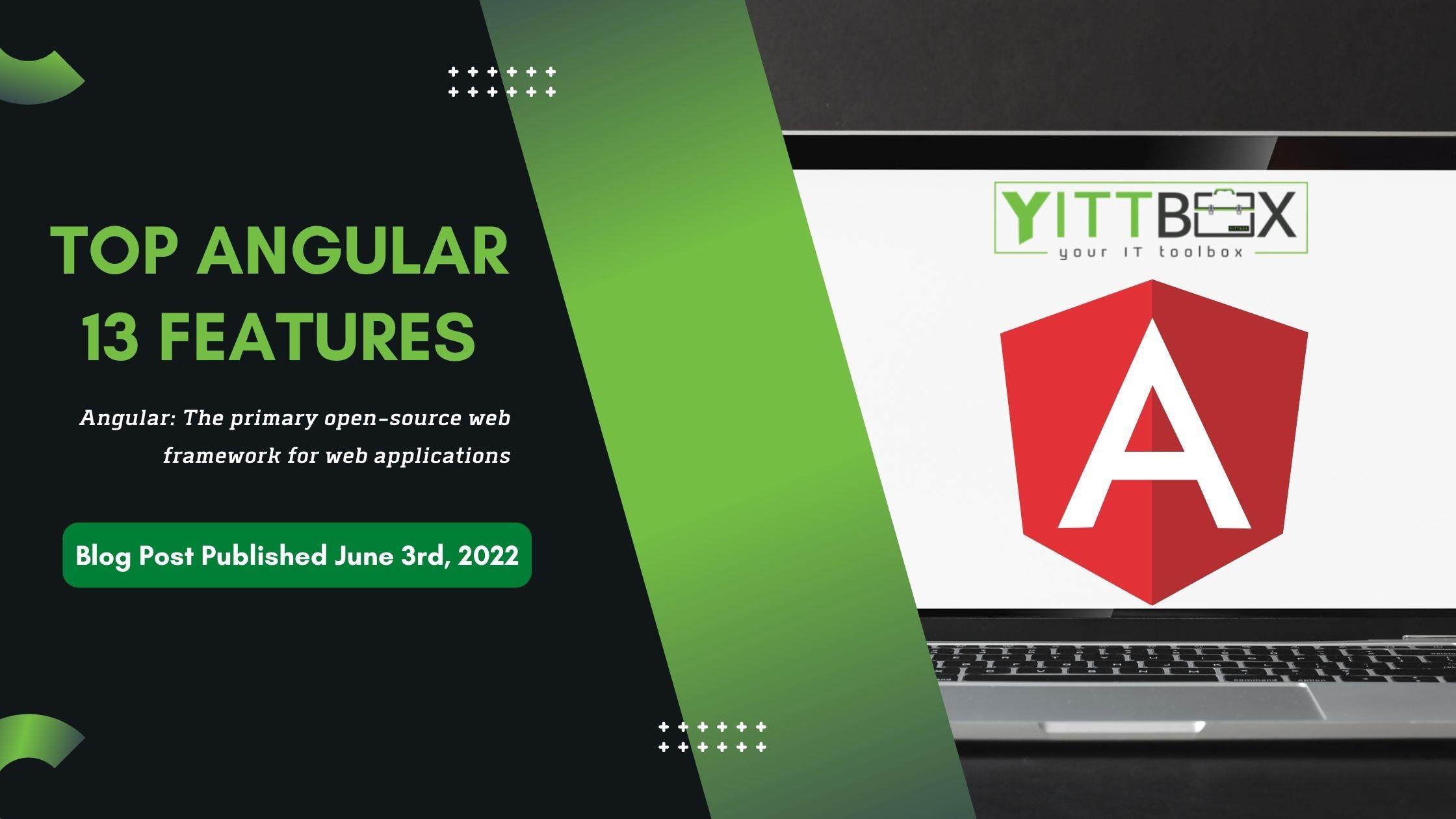 Angular has been the primary open-source web framework for web applications. Modernizations and improvements to the program allow web developers to build attractive and functional websites. From working using "Ivy Everywhere" to complete removal from the engine for view, that's how we will start our journey into learning about the latest version of Angular, i.e., Angular 13.

Since its introduction in 2010, the Angular community of developers has been continuously working to provide frequent updates and improvements to the Angular framework. Angular launched the brand new Angular 13 on the 3rd of November 2021.

When compared to the previous versions that we have seen, it's one of the most effective and well-planned updates for a widely used web framework based on TypeScript.

Below you will find a curated list of the best features of Angular 13.

The Angular framework is not supporting versions before v12.20.0. Web developers may encounter problems when installing various software working with older versions. 16.14.2 is the latest stable version of NodeJS. To ensure a smooth installation of your project, it is advised to install the most current versions of NodeJS.

They've ended support for TypeScript 4.2 or 4.3 in the latest angular versions. They are now able to support TypeScript 4.4 for angular 13. It allows us to utilize a variety of amazing features in the language. One of the major changes in TypeScript 4.4 that's advantageous to Angular applications is that it doesn't implement setters and getters, which would have created the same type.

The key features that are included in the TypoScript 4.4 are:

3. No Support for View Engine

Angular 13 is not compatible with the View Engine. The new version is 100 percent Ivy. The absence of View Engine-specific metadata or any other output formats that were previously used removes the codebase complexity and maintenance costs of Angular 13.

The framework has changed every internal program to Ivy before it transitioned and can be carried out seamlessly. Ivy makes every component work in a single order and speeds up the development process.

There is no longer a requirement to use the ngcc (Angular compatible compiler) for libraries developed with the most recent APF version. The team working on development can expect a more speedy compilation process because there is no longer a need for summary and metadata files.

The Angular team has implemented modifications to TestBed, which is currently functioning effectively to degrade the test environment and modules following each test. The DOM is now cleaned following every test. Developers can anticipate faster, more efficient, less intensive memory, less interdependent, and more optimized tests.

Routing is a tool that assists its users to manage to switch between one view and another. It allows for easy navigation by interpreting a URL for a web browser as an indication to switch the display.

In the most recent update, the router is no longer replacing the URL of the browser when the existing navigation is canceled by the new navigation. There were some compatibility issues with earlier versions of Angular, mostly related to query parameters.

In Angular 13. line fonts can boost your application's performance by increasing the speed of The First Contentful Paint. We can now gain access to every resource via default. However, we must issue the ng updates command.

The Angular CLI is an essential element in the Angular puzzle. Angular CLI assists in standardizing the procedure of dealing with the complexity of the current web development industry by minimizing the difficulty of these processes on a vast scale.

Since the launch of Angular 13, this framework has had a built-in persistent cache as a standard feature that saves the built-in output to disk. In turn, the development process can accelerate.In addition, you have total control over whether or not to enable this feature in your existing Angular applications.

8. Improvements to the testing of angular angles:

The Angular team has made important modifications to TestBed that accurately remove the test environment and modules following every test. Because the DOM is now clean after testing, programmers can anticipate higher-quality and less interdependent tests, which are less memory-intensive.

An Ivy-enabled API change released in Angular 13 is a more efficient method of dynamically building components. ViewContainerRef.create component no longer requires an instantiated factory to construct a component (you no longer need to use ComponentFactoryResolver).

This Angular 13 update adds RxJS, a reactive extension for JavaScript, and covers the latest versions of RxJS including up to the 7th version. For applications created using the new ng, RxJS 7.4 is now the default. Current RxJS v6.x apps will need to be updated manually with the NPM install rxjs@7.4 command. You can always count on RxJS 7 to create new projects. For the migration of existing projects, they must remain in their current versions of RxJS 6.

Angular does not provide support for Internet Explorer 11 as of version 13. Eliminating IE 11 is positive because it leads to smaller bundle sizes and quicker application loading. Additionally, Angular can now use modern browser features such as CSS variables and web-based animations using native web APIs as a result of these improvements. Apps load faster due to the upgraded API and the absence of specific polyfills for IE. Also, it will eliminate the need for differential loading. Better APIs and infrastructures will benefit developers, and clients will gain speedier loading and a better user experience. When a project is being moved or you are transferring your project, using the ng update will eliminate these IE-specific polyfills and reduce the size of the bundle.

It would be the best choice to give Angular 13 a chance now that you are familiar with the major updates and features. Every six months, the Angular team releases a new version update. You can upgrade to version 13 if you're still using Angular v12 to create stunning apps that conform to or even exceed modern web development standards.

Thank you for taking the time to read our blog and hopefully some of its information can be helpful for your future projects/endeavors.